Rep. McLaughlin congratulates Richard L. Duchossois of Barrington Hills on the occasion of his 100th birthday! 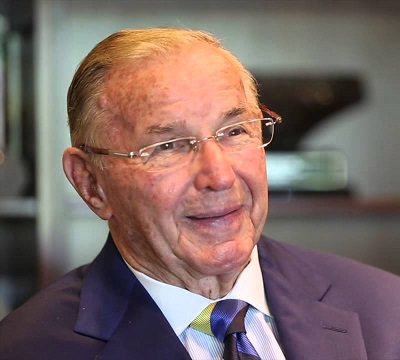 “The members of the Illinois House of Representatives are pleased to congratulate Richard L. Duchossois of Barrington Hills on the occasion of his 100th birthday. Richard L. Duchossois was born in Chicago, Illinois on October 7, 1921 and raised in Beverly attending Morgan Park Military Academy, where he graduated in 1940. He then went on to attended Washington and Lee University in Lexington, Kentucky.

In 1942, Richard L. Duchossois was given orders to report to training at the U.S. Army’s Tank Destroyer unit. Richard became the commander of Company C of the 610th Tank Destroyer Battalion and landed on Utah Beach in Normandy while serving under the 80th Division of General George Patton’s Third Army. His company fought through central France and east across to the Moselle River. In a German counterattack, he was shot and temporarily paralyzed but soon returned to lead his battalion in the Battle of the Bulge.

When World War II formally ended, Richard L. Duchossois served as the military governor of Kreis Eichstadt in Germany and eventually rose to the rank of major. He was Released from active service in 1946 and was awarded the Purple Heart and two Bronze Stars.

In 1983, he purchased Arlington Park Race Track, which later merged with Churchill Downs Incorporated in 2000. Richard, affectionately known as “Mr. D”, developed Arlington Park International Race Track into one of the most beautiful and renowned horse racing facilities in the world. He has been awarded the American Jockey Club’s Gold Medal and the Joe Palmer Award for Meritorious Service to Racing from the National Turf Writers Association and was inducted into the Chicagoland Sports Hall of Fame. He was also inducted into the National Museum of Racing and Hall of Fame and named one of their Pillars of the Turf.

Richard L. Duchossois established the Duchossois Family Foundation (DFF), which has made donations in excess of $137 million to the University of Chicago Medical Center. These donations culminated in the establishment of the Duchossois Family Institute. Through other philanthropic grants, the DFF has made substantial impacts upon dozens of charitable organizations benefiting thousands of people in Illinois and across the United States. Richard received the Sword of Loyola Award from Loyola University in Chicago in 2014. He became a director of the National World War II Museum in New Orleans so he could continue his dedication to his country and to the mission of educating current and future generations that freedom and independence are not free.