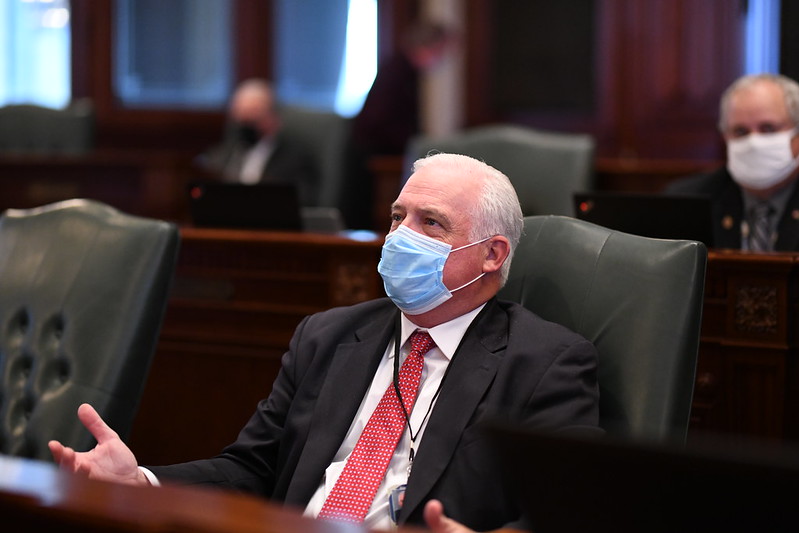 “The budget revenue came in at $42.315 Billion and spending at $42.220 Billion, but this includes $600 million in new taxes, one billion in Democratic member projects, and eliminating key tax incentives for job creators hard fought by the Republicans.

One of the key negotiation pieces in the 2019 Capital Bill was to eliminate the Corporate Franchise Tax, which was an old tax levied on businesses put in place before Illinois had an income tax. This tax has long been obsolete and has created additional headaches for over 6,000 businesses in our state each year.

Now, Governor Pritzker and Speaker Welch have determined that these 6,000 businesses, you know, those job creators out there, will NOT get the anticipated reprieve they were promised by the Governor and the Democratic-controlled General Assembly.

This budget did nothing to address the unemployment trust fund currently sitting at $5 billion in debt. Without adding money into this program, how are we going to look after the people that were unemployed with the swipe of the Governor’s pen last year?

If this reckless spending, new programs, legislative pay raises and doubling of the legislative district office allotments is not enough to make you cringe, then how about 1 Billion dollars of unchecked District spending grants for Democratic lawmakers! This special interest spending comes at $9 million per elected Democrat in the House and Senate.

It is embarrassing and ridiculous that Speaker Welch and Senate President Harmon included a legislator pay raise and a doubling of the local constituent office budgets in this budget bill. I will not be accepting these funds, as we are operating our office well below the current allocation. I came to Springfield to be the fiscal watchdog for my constituents and report an honest assessment of the state of affairs. This poorly made Budget lacked essential fiscal reforms and any prudent debt elimination, so the Democrats rammed it through at midnight without any bi-partisan support.”